Night of the Long Knives II...
Republican insiders (supposedly from the McCain campaign) have been piling on Sarah Palin in the press. Thus, we get this:

Of course, I consider the source. Even though they quote FoxNews extensively (I suppose so that disappointed republicans would believe the otherwise-unbelievable ABC), and I would also take into consideration that the criticism is both very petty, and lacking in context --- and always anonymous.

If I had to guess (with no evidence to support such a hypothesis), Sarah Alaska got under the skin of the Washington pros because she showed their man up. She has to be destroyed, and not only by a liberal media who hates everything she stands for and is, but by a consortium of political advisers and media consultants, et. al. whose playbook she has just torn to shreds. They're (the meida pros and political advisory class) used to plastic people -- politicians who understand that a campaign is all about image and marketing -- and when confronted by real people (we peasants) believe that we can do nothing right, that we know nothing, and that we have to be saved from ourselves. When we don't do what our betters tell us, we have to be vilified and condescended to, and on occasion, smeared, too.

The same process that is at work within republican party circles (i.e. assigning blame to everyone other than those who deserve it) is occurring here. Sarah Palin is about to be blamed for something she had no control over, and if the reports of discord within the McCain camp for months are accurate, was probably never included in to begin with. It was all inside baseball.

So far, the only thing these criticisms of Palin seem to zero in on are her wardrobe and shopping habits. I'm certain Hillary Clinton's people are criticizing her for her shopping habits, too. I wonder if Obama had lost, would anyone be taking Michelle Obama to task for her clothing?

If that's all they can point to when they try to substantiate the claim that Palin lost McCain the election, they are deadly wrong and extraordinarily nitpicky. Not to mention petty and craven. If we keep people like that around to run the next campaign, we'll certainly lose again, and deserve to.
Posted by Matthew Noto at 1:53 PM No comments: Links to this post

Email ThisBlogThis!Share to TwitterShare to FacebookShare to Pinterest
Night of the Long Knives...
The backstabbing has already started amongst the Republican rank-and-file. If you follow any of the "Conservative" echo-chambers online, the defeat of John McCain is due to RINO's, Libertarians, Fag-lovers, Rockefeller-Republicans and Godless Nanny-staters disguised as 'moderate' Republicans (This, despite the fact that many of the same McCain Defenders could be quoted as saying ""I will vote for McCain over my dead body!"). In other words, the same people who are always blamed by the Bible-thumping-kill-the-abortionists-see-a-commie-under-every-rock-one-percenter-Buchannanites. So far as they are concerned, if the party had run a 'real' conservative (definition: Evangelical-pro-life-flamethrowers-for-everyone-gay-bashers), 'we' would have won. Despite an economic crisis, a terrible reputation amongst congressional republicans and a President who's less popular than Ebola. Yeah, I can see how that might happen.

If only we'd been even more conservative, they always wail, we could have won. This, incidentally, has been the battle cry of every losing zealot in history: The Turks would not have been defeated at Lepanto if only their fleet had been more pious Muslims. As if vast armies infused with religious zealotry could compensate for bad tactics and antiquated weapons. Japan would have won the Second World War if only the Japanese people had made even more strenuous efforts on behalf of their divine Emperor, as if Kamakaze attacks weren't strenuous enough. In fact, I can recall a quote from a Japanese general in Burma to his troops in the field before they were slaughtered "Lack of weapons is no excuse for defeat on the battlefield", or words to that effect. John McCain was, in this analogy, part Sultan-part Hirohito, let down by faithless backstabbers and incompetents.

Always, the root cause of failure is one of devotion. One of a lack of proper effort or mindframe. Environmental factors, cultural factors and so forth, are never even considered. To consider them would cause people to question the dogma attendant to whatever principle it is you were supposed to be fighting for. In order to correct the mistakes and fundamental errors made by the McCain-Palin ticket (and the Republican party as a whole over last decade), one has to ask questions, even when the questions are unpleasant or unexpected, even blasphemous. If you don't ask the questions, all you get is conspiracy theory and pointless blame.

Of course, there are those in the republican establishment who know this, but who will never admit it. They are wedded to the One-percenters, and so, when they do a thorough post-mortem on this latest fiasco, they will not tell the One-percenters the whole truth -- the reason we were defeated wasn't because people weren't fervent enough or unprincipled; it occurred because the ground had been prepared by disastrous policies enacted by both the Bush Administration and the previously-Republican-controlled, Congress. Those people were only in a position to cause this train wreck because all of us, and that includes the One-percenters, abrogated our responsibilities as both citizens and republicans, and let them get away with it.

The reasons why we abandoned our responsibilities are numerous, and I've written about them for years here.

But, we did not lose because McCain-Palin wasn't 'conservative' enough, nor because of an evil conspiracy between East Coast 'establishment' media/Libertarians/and the so-called RINOs. That lose was a self-inflicted wound. And an even more strident brand of conservatism is the wrong band-aid for it. The proper medicine for this wound is a prescription of responsibility, objectivity and honesty.
Posted by Matthew Noto at 1:30 PM No comments: Links to this post

How to Fix the Republican Party...
Nasty defeat. Well-deserved, too. Here's some ideas on how to fix things:

This movement is in dire need of reform. It is stale and the personalities on point are mostly ticket-punchers. We don't need cosmetic changes posing at reform, but a fundamental rebuild, from the bottom, up (not the top down, which is what the party leadership would like). These changes will not occur unless we first demand them, and then hold the party to account on their implementation.

As for the changes needed:
- It is not enough to demand accountability from the other side, particularly when we try to hide our own dirty laundry. No more defending the indefensible. No more Foleys, no more Craigs, no more DeLays. For those who of you who cry about moral equivalency from democrats, don't forget how some of our leadership went to bat for these guys. This primary principle must not only be obeyed now, in defeat, it must be obeyed if and when the republicans get back into a position of responsibility, or else it's just hot air.

- The message needs changing. The old mantra of "smaller government, moral values, national security...and a tax cut, to boot!", should now also include this: "we say what we mean, and we mean what we say". Not only does that need to be hammered home in words, it needs to be demonstrated by actions. This means no more Katrinas, no more busted budgets, no more Bridges to Nowhere. As McCain said, make the folks who backslide 'famous'.

- A new formulation of Gingrich's Contract with America shoud be put forward as the guiding principles for the republican party for the next decade. It should include;

a. a plan to prevent American corporations from offshoring/outsourcing (euphamistically - 'encouragement' to stop this practice) and generally screwing the American worker. This nation's industrial complex must be rebuilt both to provide jobs and future economic activity. This may be a no-no for free-marketeers, but we have to put people in this country back to work. Give them incentives (or punishments) to bring the jobs back home. Sometimes you need to break eggs to make omlettes. We shoujld no longer give a rat's ass about whether the Chinese can afford to buy American products when it's becoming clear that Americans can no longer afford to buy them.

b. Present a challenge to American industry and science to produce a viable, sustainable alternative fuel -- and just as important, the machinery which can utilize it. If it worked for NASA, it'll work for Exxon-Mobil and GM. It's about time American industry (what's left of it) started doing what it used to do; making actual products, that people want, at a price they can afford.

c. Get the party off the Christain Right teat, and put the Godbots back in the pews where they belong. Morality will never be legislated; it has to be nutured -- outside of the political system -- on an individual level -- which (ironically) is where the churches of this country historically do their best work. Simply packing the Supreme Court will not get rid of abortion-on-demand. Create the culture first outside of politics, and then the newly-created culture will reshape the politics. Not the other way around.

d. Change the immigration debate not by stigmatizing immigrants (after all, we are all the descendants of immigrants), but rather by advocating policies which steer new immigrants towards assimilation. Punish those who break the law, espcially employers (instead of milking them for campaign contributions and votes). No more welfare applications in Spanish, no more voting forms in Swahili, no more money for bi-lingual education. The only time a foreign language should be used/transmitted by the US government is if it is matter of public health or safety. Assimilation is the most important solution to the immigration problem, enforcement of existing law is the second. Armed marines with orders to shoot lawbreakers would be the third.

e. Fight like hell to revoke the monstrosity called Campaign Finance Reform (three lies for the price of one). John McCain hung himself with his own rope, which is appropos. The stupidity of this particular legislation was obvious from the very start. It's appropriate that McCain's system, which was really nothing more than a way for elected politicians to achieve tenure, should be at the very foundation of his failure to achieve higher office.

f. Demand accountability. Every member of Congress should be required to keep a website in which their day-to-day activities, in minute detail, are updated every day. That includes every meeting, every vote, every bill they sponsor, every dollar they spend in their offices, every contribution and endorsement they receive. Each member should be required to explain their votes on it, too, in excruciating detail.

- Find a way to not only communicate 'the message' but find a better way of actually describing how your message will translate into action, also. We get it, we just don't know how you intend to do it. Details, details, details...and then explain why the details are consistent with both republican and conservative principles.

- New blood, new blood, new blood. Stop with the litmus tests which prevent that new blood from entering the party debate. If this is truly a Big Tent Party, then the price of admission to that Big Tent must not be anti-gay, pro-gun, anti-regulation-only; if we have a fiscal conservative or constitutional literalist who's weak on a social issue, we must stop labeling him/her RINO and then showing them the exit. Orthodoxy should never trump effectiveness, or utility.
Posted by Matthew Noto at 7:29 PM No comments: Links to this post 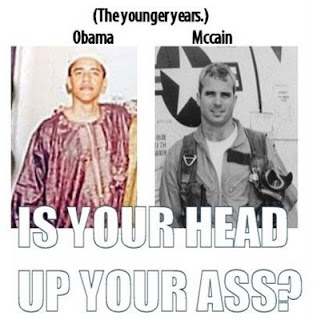 What More Do you Need to Know?

Posted by Matthew Noto at 10:58 AM No comments: Links to this post Posted by Matthew Noto at 10:56 AM No comments: Links to this post