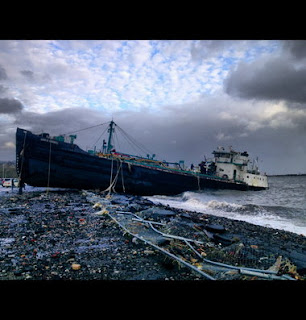 The picture at left is an oil lighter that was lifted by a storm surge right out of New York Harbor during Hurricane Sandy, and dropped on the shoreline near the town of Stapleton (which in case you didn't know, was once home to the Staten Island Stapletons of the National Football League).This ship is now apparently leaking residual oil left in it's tanks, leaving the neighborhood awash in fuel oil, with a potential time bomb ticking near populated areas.

In addition, there is now a report of more leaking tankers and a potential oil spill in the Arthur Kill, along Staten Island's shared shoreline with New Jersey.

NBC News with video and report of the damage on Staten Island. This will break your heart.

Here's a mini slide show of the damage done to Staten Island by Sandy.

Seen on the streets of my old neighborhood of New Dorp, yesterday:

A van bearing Massachusetts license plates pulls up to storm-ravaged Cedar Grove. Six people get out, and start videotaping and taking still photos of the storm damage. They are not wearing Press badges, and are apparently tourists who either deliberately made the trip down to New York City to see the damage, or tourists who were caught in New York during the storm.

They are asked by someone actively helping a neighbor in distress (that would be my sister, who has been in Cedar Grove every goddamned day since the storm ended helping her girlfriend who has lost her house clean up and salvage anything possible) if they are there to help or "just take fucking pictures...". The photographers respond that they are there to help. At which point, my sister asks them, "well, what do you have in that van?".

The photographers tell her that they have just been shopping, and they have bought brand new blankets and bedding, at which point my sister demands that they turn it over to her, seeing as how there's people in this neighborhood without so much as a blanket, and because my sister can be one tough, scary bitch when she's pissed off, they comply. Whereupon, they got back in their van and fled. My sister then distributed the blankets to some people in the neighborhood.

One question: There is no gasoline in these parts, and the only two stations that I know of capable of pumping gas at this time have long lines of cars waiting for fuel, and are limiting customers to $40 of gas, total. Where did these people get gasoline to come sightsee in other people's misery, one wonders?

Also seen on Staten Island: roving scrap metal salvage trucks pulling right up to storm-devastated homes, and asking the owners if they can haul off this or that bit of twisted metal, often as these people are trying to save whatever they can from the flooded pile of kindling they used to call "home". Many are just taking whatever they think they can get away with, and I'm told that some are offering to take the scrap away "for free" -- like it's some kind of public service? -- without compensating anyone. Average price of scrap aluminum this morning? $2.10/pound. Weight of aluminum siding on the average home? About 1/3 of a pound, per square foot. These guys are becoming a nuisance, and are interfering in recovery efforts. In some instances, they are making conditions more dangerous, as pulling scrap metal out of a pile of debris can often cause further collapses.

In other post-Hurricane Staten Island News:

Mayor Bloomdouche, the absolutely worst Mayor ever, has decided that it is more important to reposition police, fire and other emergency services to support this Sunday's NYC Marathon (which begins on Staten Island at the Verrazano Narrows Bridge) than it is to keep them on duty helping people recover from a natural disaster.

Update: The Marathon has been cancelled! Finally, someone grew a fucking brain in Gracie Mansion, or maybe it was the tremendous public outcry? Who cares: the last thing we needed was 50,000 skinny, mostly-white, yuppies running around, passing out ion the streets, and shitting their pants.

Staten Island may Become Obama's Katrina: This sort of crass stupidity is par for the course for our Mayor, who up until now has busied himself with keeping the Outer Borough Proles out of Manhattan, making sure we don't have too much salt in our street meat, and eradicating the deadly threat of 32-oz. sodas. Bloomdouche may have once called himself a Republican, but he has always been a Nanny-state-loving, died-in-the-wool, tell-you-all-how-to-live Libtard of epic proportions. This proves it. Nero fiddled wile Rome burned, Bloomberg diddles while New York Drowns and Starves. if you ever needed more proof as to why Liberals need to be checked, you have now had three glaring examples in the last 17 years: Nagin spent the early portion of Katrina in a fetal-position panic attack, Bloomberg worries about the Marathon and fat welfare recipients while his city is hammered by a hurricane, and Obama toured the ravaged Jersey Shore for a photo op and then headed to Las Vegas for another fundraiser.

By the way, there are more people on Staten Island -- a single borough of New York City -- than there ever were in New Orleans. That's almost 500,000 people crammed onto a 12-by-7 mile-long island, but we're mostly white, and there's a democrat in the White House, so no one gives a shit.

Update: Bloomberg is about to get his Marie Antoinette treatment, as people in Brooklyn and Staten Island are approaching full boil because of the Mayor's decision to go ahead with Sunday's marathon.

And here, Bloomberg is being compared to New Orleans helpless and hapless Mayor, Ray Nagin. And not in a flattering way, either. Hey, at least Nagin eventually left his fancy hotel room to walk through the muck.

In the meantime, pleas for help, for food, water and clothing go unheeded, and there are threats of riot in the air here in Staten Island, especially after the bodies of two young boys (ages 4 and 2), swept out of their mother's arms by a surging tide, were finally found.

Another article on Bloomberg's fucked up priorities: desperately-needed generators being diverted to Marathon pre-race set up. This is occurring while Bellvue Hospital is evacuating patients due to lack of power.

Update: here's a link to the story on the two Lost Boys. Rumor has it that a relative denied their mother shelter as she tried to avoid the storm, and some reports say it was local residents --not relatives -- but no one is quite certain. Stay tuned, because this story is one to turn your stomachs.

The Red Cross hasn't even been here yet.

More tragic news: Hero cops saves family, then drowns in his own basement.

Just as soon as I get the information, I'll be posting some links where you can donate to help relief efforts in the Forgotten Borough of New York City, In the meantime, you can donate cash, food, clothing and anything you think people might need to the Salvation Army , The American Red Cross, and Catholic Charities, which all have good track records with providing aid just as quickly as they can.

Some Good News: Local Hotellier will not displace those left homeless by Sandy. When this is all over, someone had better nominate Richard Nicotra for sainthood. He is a shining example of how private citizens utilizing their own resources are better at helping their neighbors in need than any government.

Update: You'll be happy to know that Katie Holmes and her daughter, Suri, managed to escape their multi-million dollar Chelsea apartment last night, for better digs with electricity, running water, and no floating bodies of dead animals, a condition only the peasants of Staten Island should have to suffer. It's a fucking waste of newsprint to follow the lives of the super-famous and super-wealthy, while others are suffering.You people who worship celebrutards should be taken out and shot, as you are poison to the gene pool.

Update from New Jersey: Unionized utility workers have raised holy hell that non-union workers from out -of-state have been asked to come and restore power to some 4 million New Jerseians (like my aunt in Netcong) currently without power and water services, because Heaven Forbid overpaid union dumbasses don't have an opportunity to milk the double-and-triple overtime cash cow during a natural disaster.

Because it's not truly a disaster until Chuck Schumer shows up: Senator Dingleberry arrives and immediately patronizes a Staten Island woman in front of her storm-damaged home. They say the most dangerous place on Earth is between Chuck Schumer and a television camera. Perhaps this dash to the kleig lights will finally spell the end of this national embarrassment. New York has the absolute WORST Congressional delegation in America. If they aren't merely corrupt, then they're clueless and condescending. Not to be left out, Senator Placeholder, Kirsten Gillbrand, also made an appearance, if only to get her face on television, too, because she's otherwise about as useful as tits on a bull.

One wonders how many cops were needed to escort Senator Asshole around so he could get his picture taken?

Posted by Matthew Noto at 9:42 AM No comments:

Things have been a bit hectic around Lunatic Central these last few days because of Hurricane Sandy. We were without power here for nearly three days, but things are slowly returning to normal. Posting will be extremely light for a bit, as there's some cleanup and house repairs that need to be seen to, and I will have very little time for this sort of tomfoolery.

Even at that, we here at The Lunatic's Asylum were extremely fortunate; being up on higher ground, and protected from the worst of the wind by the hills around here, we still have a house. We weren't flooded out, and the loss of power and phone service for a few days was a minor inconvenience compared to what some others have suffered from this storm. We ask that you remember these folks in your prayers, and that you maybe open your wallets and make a donation to the Red Cross to help those who are currently homeless, injured, and hungry.

We realize things are tight for everyone these days and if you can't fork over $10 or $20, then some charities are accepting all sorts of other aid: old clothing, blankets, tools, food donations, anything that can be used to help a few folks fill a belly for a night, keep warm, or rebuild a home or neighborhood. If you can find something buried in a closet that someone might get some use out of, then please, find a way to get it to them. You can make most donations of this sort to your local Salvation Army, or at your local firehouse and police station; they'll make sure that someone who needs it, gets it.
Posted by Matthew Noto at 3:26 PM 3 comments: