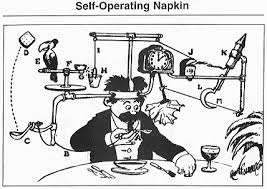 I had occasion to accompany Tess to the New York City Department of Vital Records, yesterday, in an effort to recover some very important and necessary documentation, and was treated to a first-hand experience of just how stupid and quite redundant most public union...ahem...workers...are.

That picture on the left? That's a Rube Goldberg. For those who were born under rocks -- or after X-box, which is sort of the same thing -- Rube Goldberg was a cartoonist who used to create images of the most outrageous machines that performed the simplest of everyday tasks.  The point was to go to an extreme to avoid doing something simple and mundane. This one shows a machine that wipes somebody's mouth without them having to dirty their hands. This fairly describes the Bureaucracy of the City of New York: why work efficiently when you can add so many complicated steps to the process? And employ a lot of seemingly useless people while you're at it?

After all, it's only TAXPAYER MONEY, right?

Read more »
Posted by Matthew Noto at 9:58 AM No comments: Links to this post