Romney Must Win to Save Supreme Court For Republicans...

One aspect of the upcoming Presidential election that has received little attention is the subject of the Supreme Court.

And why shouldn't this topic be getting short shrift? After all, we'd apparently rather argue over who has released more tax returns, or at least that's what your Obamaniac American Press would have you believe really counts, notwithstanding the debate over whether this or that act of Muslim fundaMENTAList murder is terrorism or not, our government deciding to harass and censor a citizen to appease the Arab Street, or celebrating yet another successful Obamatard appearance on Letterman. We're kinda busy, you know, debating the important stuff, and the Supreme Court is about 10,546th on our list.

Or at least it's that low on the media's list.

Read more »
Posted by Matthew Noto at 8:49 AM No comments: Links to this post

In a transparent effort to drum up a controversy where none exists, and doing so in such a childish and petty way that it almost makes you pine for the days when REAL Libtard journalists, like Cronkite, Jennings, Moyers, Arnett, and Rather, knew how to lie at least half-assedly convincingly in defense of a complete loser asshole of a President who had a drunk chick's chance in a redneck bowling alley on two-for-one Coor's Lite night of pulling out a squeaker victory come Election Day.

Romney Gaffes! Screams one headline. Romney accidentally tells truth and admits to being a miserably rich bastard who hates poor people and puppies! furiously spins yet another third-grade-reading level-use-a lot- of-short words-so-the-college-kids-can-understand-you denizen of his mother's basement. Romney in Trouble! assures your local fishwrap, whose circulation is dropping faster than a Chicago schoolkid's chances of achieving basic literacy.

Read more »
Posted by Matthew Noto at 5:39 AM No comments: Links to this post

Douchebag of the Week: The Arab Street... 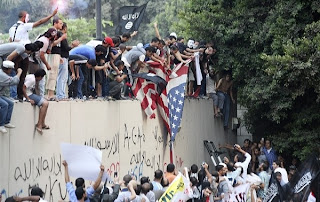 This is the first time in the history of the prestigious Douchebag of the Week Award that an entire ethnic or religious group has won the big prize.

Mind you, this is no simple accomplishment given the normally very low standards of mindless behavior that are required to even be nominated. In this case, something unprecedented has occurred, and an entire people has displayed such egregious behavior that I am forced to conclude that what was once (wholesale douchebaggery) the exclusive domain of only the worst of  individuals -- a politician, a media figure, perhaps a denizen of Hollywood -- has gone viral, and infected an entire ethnicity.

Read more »
Posted by Matthew Noto at 8:01 AM No comments: Links to this post