This Just In: New York STILL Has the Dumbest Congressional Delegation in America...

Brooklyn democrat claims Slavery persisted in America until the 1890's.

You have to watch the video to believe it (can't embed it for some reason). As someone who was actually raised in Brooklyn, I'm both embarrassed, and totally unsurprised, since the neighborhood went to shit years ago -- just a soon as the Caribbeans began moving in in huge numbers.

You know, It has gotten way past the point where one can still have hope for certain segments of American Society. The proof of this is reflected in the people these subsections of the population elect to important posts.

We apparently have one of those segments which has sent someone who is fundamentally confused about  rather significant parts of American History, going on television and announcing her ignorance to the world. I'd go as far as to wager that not only is this Congresswoman totally unaware of her ignorance, but that even after it had been pointed out to her, she'd still wear and embrace it like some sort of special commendation, because it is better to feign grace under pressure than to actually admit that you have brain damage..

After all, her job as a Congresscritter is not to have any specific knowledge, of anything, or to display some sort of basic competency; it's to find a way to keep the Welfare taps open for her 'constituents' (i.e. the professional beggar class), who are probably even dumber (and unconcerned about real issues) than she is.

“So this is America's best and brightest – or, at any rate, most expensively credentialed. Sandra Fluke has been blessed with a quarter-million dollars of elite education, and, on the evidence of Wednesday night, is entirely incapable of making a coherent argument. She has enjoyed the leisurely decade-long varsity once reserved for the minor sons of Mitteleuropean grand dukes, and she has concluded that the most urgent need facing the Brokest Nation in History is for someone else to pay for the contraception of 30-year-old children…”

Posted by Matthew Noto at 8:50 AM No comments: Links to this post

It's finally over. The great big jamboree for the preternaturally stupid, the aging hippies, the Welfare Pimps, and the Professional Poor and Aggrieved is done. The City of Charlotte can now relax, even if it will take several days for the cloud of pot smoke and the aroma of bullshit to dissipate upon the eight winds. The moans and groans that I have heard over the last few days from those friends who live in my adopted Second City were the sort one usually only associates with someone dying of a very painful, and terminal, disease.

The people of Charlotte are damned happy this morning to have this three-ring circus, this travelling bordello of politics, this concentration of the worst elements of American society, finally gone.

Lots of whining, and continuous talk of vaginas, basically.

Just a few quick points before I go into (sordid) detail:

1. You have to wonder at the true motivations and intentions of a party that can't even answer a straight question about it's platform. Apparently, the DNC has erased all references to God in it's platform, and all references of Jerusalem as the capital of a Jewish State. Fair enough: on the one hand, I don't mind removing the word 'God' since God does not exist, and because it is a true reflection of the beliefs of a majority of democrats: even the so-called "reverends" who lead the rear-guard of the Civil Rights era apparently don't take the Bible literally, or at best, use it to justify things and ideas that it most certainly doesn't justify.

Read more »
Posted by Matthew Noto at 6:46 AM No comments: Links to this post

Cat: The Other White Meat... 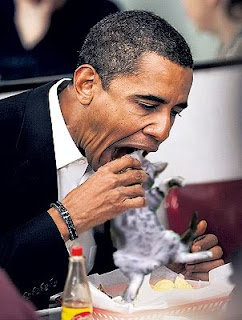 I knew there was a reason why I've always hated fucking cats.

It now turns out that your feline pet is a deadly health hazard, a host for a parasite that has the ability to destroy you physically and mentally. Your cat is poisoning you, which, I figure, explains why it is that some people will spend their entire day surfing the web for pictures and videos of cats in "cute" situations or circumstances:

A cat frolicking in a laundry basket.

A cat in a cardigan sweater.

Kittens dressed up as Carmen Miranda.

A cat pouncing on the beam from a flashlight.

It's the cats driving their owners insane with a deadly disease that causes dementia and schizophrenia, and it's called toxoplasma. The "adorable" little animal you've been torturing everyone else in e-mail with is a killer.

Read more »
Posted by Matthew Noto at 6:00 AM No comments: Links to this post

I read this earlier in the week, but had to take some time to think about the implications of this idea.

Now, the author may be on to something here, and I would think that this would suggest much more scientific research be done on the subject. If the road to wealth begins with a different mindset, or perhaps if we discovered that some people are, indeed, hard-wired to eventually become rich, we might have unlocked the secrets of true egalitarianism.

Read more »
Posted by Matthew Noto at 8:56 PM No comments: Links to this post